The track listing for STUKA SQUADRON's SECOND ALBUM 'ZEPPELIN" has been CONFIRMED and can be found below. The album will be available shortly.

Please note that there MAY be two versions of the album available. This is because 'Zeppelin' is a concept album and some tracks consist solely of diaogue in the vein of 'Operation Mindcrime" (actually the closest comparison we can find is 'Captain Lockheed and the Starfighters' but nobody has heard of that except Pyre and Dave Wyndorf). The listing below is for the full version of the album. Brief details about each track are contained below,

Pit of Fire. 'Pit of Fire' has been in The Squadron's live set for a number of years. It was written by Pyre in 2012 and a video of the song was released in 2018. This is the final album version with Strange on vocals.

The Last Valkyrie. A song written by the new line-up featuring some outstanding work from Count Axis on guitar. Dedicated to the shield maidens in the front few rows.

Tiger II. The first song we wrote in the new line-up. Fans of 'Tales of the Ost' will remember the trouble Tiger I caused. So we brought it back - but bigger. Then we added lots more zombies.

It Is Him. The first of our dialogue tracks. General Guderian is chilling at headquarters when he receives very bad news. Featuring Strange as Doktor Faustus,

One Man Blitzkrieg. The most aggressive Stuka Squadron song ever written. Remove your shirt, Head to the front. Channel your inner panzer.

Montague Summers. From the quirk-laden pen of Gravedigger Cox. The vampire-hunting fraud has an unfortunate encounter and returns from the grave.

Warriors of the Undead. The second of our two dialogue tracks. Our (anti) heroes are sent back in time and frighten the locals.

Zeppelin. The title track of the album and our Maiden-esque tribute to those forced to go to war in a big bag of hydrogen. Perhaps it deliberately trolls a well-known metal band, Who knows?

The Weeper. The Weeper was written for what became the New Sound of War album but fortunately was never used. Here is the final version. Strange duets with our first guest star Meltem. Featuring Terrorsound on guitar.

Destroyer of Worlds. Another heavy one from Axis and Pyre. Strange has a stab at basso profundo. Our adversary reveals his true nature. Its the power of love....

Our Bloody Ragnarok. Written to tie up the story for the 'Zeppelin' concept - but it turned out really well! It will therefore feature on both versions of the album. Strange duets with our second guest star Moog.

Angel of Mons. Closing out the 'Zeppelin' album, this one was written by Axis and Strange. It is based on a real story from World War I but with a very, very dark twist. It also has the best battle sequence in Metal ... 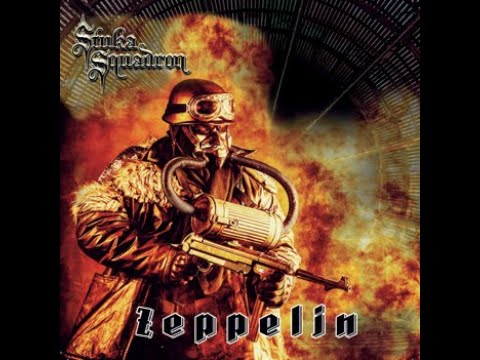